Zack swims in the deep end!

So I honestly think that after watching all the olympic swimming, it caused Zack to turn a major corner in swimming. Before, he was always wary of the "deep end" of the pool (which is 80% of the pool). He would be happy just playing in the shallow end and never wanted to venture out.

So the other day in the shallow end, Zack says to me that he want to jump into the deep end together. I quickly agree and suggest we swim back to the nearby edge after we do. We do it, and Zack is totally fine doing it all himself. Jen then daringly suggests that we try and jump in and swim to the other side of the pool across the deep end. Zack doesn't hesitate, and so he and I both jump in and swim to the other side! Zack didn't need any help! He did it a few times without even using his hands and just trying dolphin kicks and swim kicks. And he tried a few time with big arms. We couldn't believe it! He even climbed out of the pool all by himself after reaching the edge, so now he's officially waterproofed at 4 1/2!

He then wanted to dive down and touch the bottom and pick up toys at the bottom of the 9 ft pool. So I helped him, even had him hold on to my back like a backpack as we went to the bottom. He's now a super fish!
Posted by Andy at 8:55 PM No comments:

Here's an update that is long overdue.
Around 18 months, Zoe said her first sentence. She picked up a wrapper on the table, gave it to me and said , "This is trash."
It's great to see that she likes identifying things, and also helping! Since then she's been saying many 3-5 word sentences. She knows how to correctly interchange "I" and "you" when repeating sentences she hears, for example if I ask "are you poopy" she will say "yes, i'm poopy". She's very happy about trying to say the whole sentence, and you can see a look of concentration when she tries it.

Zadie has picked up on the baby signing more than Zoe, and Zadie relies more on hand signs to communicate what she wants.

Zoe's become very opinionated when it comes to clothes, so that when I dress her in the morning, I have to present her an option because she often resists what I first try to put on her.
Posted by Andy at 8:40 PM No comments:

I forgot what the tooth count was at the time, but I believe that Zoe still only had 4 teeth, even at 18 months, and all of Zadie's teeth had come in. We've started to see Zoe pull ahead in size, and she's becoming noticeably bigger.
The girls were described to us by their daycare teacher in one word:
Zoe=contemplative
Zadie=spunky

The 2 year update will be coming in a week or two!
Posted by Andy at 8:11 PM No comments: 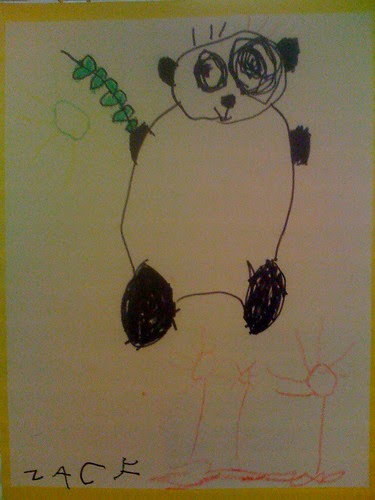 Zack art
Originally uploaded by Drumtech
Posted by Andy at 8:58 PM No comments:

Well, the short answer is every one is ok, but the family had an epic fail this morning. the only things missing were an injury or runaway dog.

First, Zack. Zack promised that he'd get dressed before his friend and classmate Gregory (and his new puppy) came over at 7am, but somehow that didn't happen. Poop #1 called and Zack was busy with that but made a mess and didn't clean himself well. Gregory was on the way in while I got a crying Zack back to the bathroom to get cleaned and into his bedroom to get dressed.

Then I go visit the girls, and am greeted with Zadie saying "uh-oh". Sure enough there is barf all over her crib and toys and a MED (massively exploded diaper) (which is Poop#2) to the point i couldn't tell the difference between the barf and poop. So she gets cleaned up up while Zack gets dressed and plays with Gregory. Zadie needs an instant bath because she has a mix of stuff all over her. Zoe is wandering around and trying to pull the soiled toys and stuff out of Zadie's crib so I try and quarantine the room and have Zoe wander with the boys while i clean Zadie. Zadie gets washed and dried (and gets upset that I used the doggie towel instead of the bunny towel) and dressed, then I tackle Zoe

Zoe was fine until I changed her (Poop #3) when it was clear she has a diaper rash which put her in a very foul mood. I barely got the diaper on, and she wouldn't let me put any clothes on her and began her Zoe-flop-tantrum. I left her alone in the living room because Zadie had just begun her tantrum. I close the door to the girls room to keep anyone else from going in there until i clean it.

Zack and Gregory had gotten some crackers out of Gregory's lunchbox, and Zadie saw them and wanted them, but she didn't get them and then became very upset. Gregory was nice to give her some to appease her when I asked and end the Zadie tantrum. So it's on to breakfast with a dressed Zadie and naked Zoe. I've run out of milk so I can't feed the kids what they are asking for (cereal) so it's apple juice and cereal bars and muffins for all. Zoe has calmed down a bit so it's off to get dressed again.

Back to Zoe's room I open the door and realize that the dog Tobey was closed inside. Not a problem until I realized that he had been "cleaning" the soiled bed toys and had decided to leave a small present (Poop#4) on the floor nearby. Zoe is calm enough now that she picks out her clothes (a pooh shirt, or should I say "poo" shirt). At this point I put on Sesame Street to enchant the kids while I clean up the house and try not to lose my breakfast. We got off to school and the drop off was fine. Zadie ate well, is in good spirits, no fever, and was totally fine.

By the numbers:
5 people in the house
4 poops (in the house)
3 full-fledged tantrums
2 dogs
and 1 barf episode
Posted by Andy at 9:50 PM 2 comments: