Zack turned 1 year old and had only 4 teeth. Fortunately, his two front teeth have decided to come in bringing it to a total of 6 so far. 4 on top, 2 on the bottom. It is not so nice to put your finger near his mouth anymore....

It's a late night/early morning as Zack has woken up a few times with a stuffy nose, so I'll catch the reader up with some rough updates while I'm still awake, waiting for the next outburst.

We've now discovered how to hide remote controls. This was cute at first but becomes very annoying quickly. We got Zack a small wooden train set and he LOVES it. he has developed a soft touch to push the cars around the track without causing them to jump the track, and carries the train cars in his hard around with him almost contantly, trying to find new surfaces to roll them on. The baby babble continues, cute to hear him almost form words, but he talks and giggles almost contantly.

Zack is now off to see the Gulf of Mexico and see his first beach. I'll have much more to report in a week.
Posted by Andy at 3:19 AM No comments: 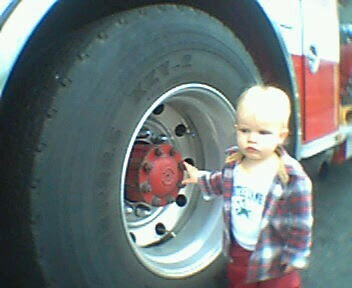 Built for power, not speed

Zack is a terrain consumer. He reminds me of those Stomper 4x4 toys of the 80's that will crawl over anything. He seems to want to learn new terrain. On inclined ramps and walkways, he will continuously walk up and down them as if he wants to practice. Also in the sand at the playground he seems drawn to this new terrain and will work on walking over it again and again to get better. He's currently moved onto lumpy grass patches. He's certainly not the fastest baby on two feet, but he seems dedicated to making sure he can walk on anything. However, going down steps are still a barrier. He refuses to back himself down steps and wants to hold a hand and walk down it forwards (dangerous). At least he won't do it forwards by himself.

Food fights: Let the difficult feeding sessions begin. Peas and Cheerios aren't just for eating anymore, they fly nicely through the air and onto the floor.
Posted by Andy at 10:34 PM No comments: 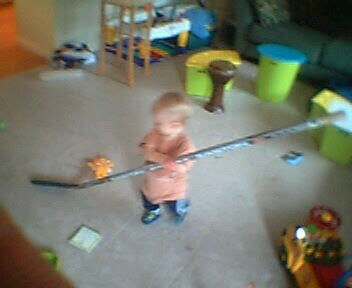 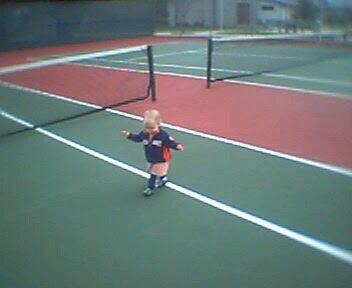 "No!" and blanket bondage

It finally happened, at 12.5 month, he said "no" . This has not been witnessed by us first hand yet, but our nanny said that as she started putting his toys away the other day, he responded by protesting, "No, No, No, No!" She was taken aback, as were we. We haven't been saying "No" too much to him, other than gently correcting things that he does, like playing with the fireplace, grabbing pens or dangerous objects, or tipping hanged pictures within his reach. I guess he's learned quickly!

One funny pen story: Zack picked up a pen from the couch, we said, "No Zack, put it back", he seemed to understand and then put the pen back on the couch. We praised and applauded him, which in turn got him to grin and clap. But then he went for the pen again, we repeated our command and the same result happened. Then he started going through and repeating the following cycle all on his own: Pick up pen, shake head "No" (while grinning), put the pen back down, and then clap in delight. It took all our strength to keep a stern face and keep from laughing!

This week has seen Zack go from zero attachment to super attachment to one of his bankets. He now needs to carry it around the house and we've started taking it with us on car trips and walks, requiring a lot more cleaning now. The change was so sudden, and it didn't seem to replace another attachment to another object. It seems to be a new, but healthy attachment.

Also we went down a slide all by ourselves the other day, with daddy catching at the bottom. He needs to be placed in a seated position before going down, but he will initiate the inching forward until he starts to slide, and seems to enjoy it quite a bit!

So since zack has started to recognize and respond to words, but isn't talking, I decided to teach him a few simple baby sign language signs. We started with "eat", "milk", "more" and then we are expanding to "all done" and "bed". Zack picked these up pretty quickly in about 3 days. He now is easily able to tell (or remind us) that he hungry rather than us having to figure out why he is crying. He seems to like the signing and wants to learn more.

Also he makes a funny new sound. He is can now laugh while inhaling. It's quite a funny sound, I thought he was choking at first, but now understand that he's just really excited. We just need to make sure he doesn't try it with food in his mouth!