Here are some new criblets:
Criblet - Meaning
Mommy Tights - ???
Slippery Cows - Describing how animated cows look walking across the screen
Piggy Forklift - said after looking at his fork at dinner. He said "Fork", then "Forklift", then "Piggy Forklift"

Also, here is a video clip of the bouncing castle. It is in .3gp format, which works for me, but i don't know if it will work for you. Let me know, if it doesn't and I'll try another format.

Zack is becoming a physical rough-and-tumble little boy. We stopped by an inflatable jumping castle by a pumpkin patch yesterday and allowed Zack to jump in it. Alone, he was cautious but happy, but when two 10 year olds entered, he went crazy and had a blast. He would imitate how they would jump, run around and fall down. And even joined in the play tackling - the bigger kids were very nice to let themselves be tackled by a 21-month-old. I've got some good video of this but need to convert the format and upload. Should be available soon.

And there is a brilliantly written funny article about a child's encounter with a Fire Truck at theOnion.
Posted by Andy at 1:56 PM No comments:

Zack just discovered Jen's family of Snoopys in his closet. He pulled them out and was very curious about them. Very quickly he began arranging them against the wall calling the two big Snoopys "Mommy 'Noofy" and "Daddy 'Noofy" and the two smaller ones "Girl 'Noofys". After playing with them for a bit, he decided to put them to bed back on the closet shelf. So he then started saying "Nite nite 'Noofy" and started putting them back on the shelf lying down. He then started whispering "Quiet" and looked at me and said "Shhhhhh" with his finger in front of his mouth. It was all I could do to keep quiet and not laugh. He then closed the closet door and waited.

And if that wasn't enough, he then realized something was unfinished. He opened the door and took out the two small snoopys and put them on the chair and opened up one of his favorite bedtime books "the Corgiville Fair" and started to read it to them. I was so curious to see how he would do it. He was saying things like "fix car" or "race, yea!" or "wash goat" which is what he could identify on the pages of the book. It was very cute, and we'll see if he starts to become more attached to the Snoopys going forward.
Posted by Andy at 8:15 AM No comments:

Well, that last video post generated a bunch of requests for more video. So here's another. Zack is trying on his bear suit for halloween. Take a look. 20MB.
http://www.gracks.com/zachary/zackybear.mpg
Posted by Andy at 9:40 PM No comments:

Zack has discovered funny noises to make on his arm. Here's a link to the video which is 6.8MB. If that link didn't work, try this: http://www.gracks.com/zachary/funnyzacky.mpg
Posted by Andy at 9:13 PM No comments:

Zack is now 21 months old. The criblets aren't coming at the pace they used to. But here are some more
Criblet - Meaning
Car Sleeping - a toy car that is upside-down
Moose Muffin - his favorite book "When you give a moose a muffin"
Cinco Seis - ??? it sounds like he's saying 5, 6 in spanish, but he waves his arms at the same time. I hope I find out what he's trying to say.

He is excited about Halloween saying "Halloween Coming" and yesterday learned how to walk around like a zombie with his arms out going "arrghhh!". He is very interested in identifying people, and now says "Who's that?" when he sees someone new, and can identify all his friends, AND his friend's parents. I picked him up the other day from daycare and he saw someone getting out of a car and said "Kalya Daddy" and he was right!

We bought our first potty over the weekend, and zack has been excited about it. He currently practices sitting down on it and saying "Zacky Peeing" but I suspect he's just pretending. As long as he's getting used to it though, that's good. That's step #2 along the potty training path.
Posted by Andy at 10:57 AM No comments:

These are two new names he's given himself. I assume Zackaroo is what someone called him at daycare and he picked up. He now uses the word "hurt" correctly in short sentences which is VERY helpful, he can now say "foot hurts" or "teeth hurt" which helps us identify what is wrong. Also he has started to announce his #2's, saying "Zacky poop", which is the first step in getting potty trained.

We also invented a new game called "Poof!". Zack sits on the edge of a beanbag and I sit down hard on the rest of the beanbag sending Zack flying. We discovered this by accident of course, but Zack was so amused that he demanded More More More!
Posted by Andy at 8:01 AM No comments:

Zack and Mom at the hockey rink 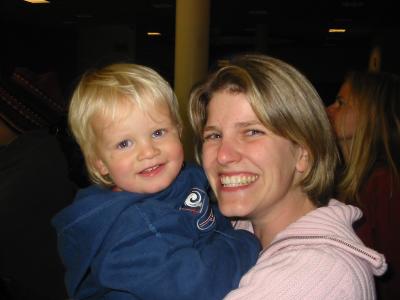 The cold temperature brings out his little rosy cheeks. This has to be my all-time favorite smile shot of Zack. He normally is very happy, but it is hard to capture smiling with a camera.
Posted by Andy at 11:16 PM 2 comments: 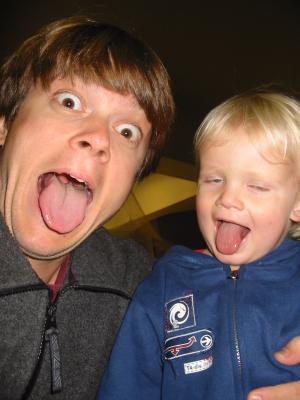 Sometimes the unexpected pictures are the best...or not.
Posted by Andy at 11:11 PM No comments: