Criblet - Meaning
Zebra Socks - Zack's way of describing his new striped socks he is wearing today.
Tiger Sauce - ??? Zack said this repeatedly while putting a toy seal on a small floating mirror in the bathtub. Any guesses?

His pronunciation is quite clear and good for nearly everything his says, with one exception: "Balloon" is pronounced "Budder-Boh". He is having a blast using adjectives in 2 word phrases like Funny Mommy and Crazy Tobey and Hot Water. We are trying to get him to say "Tobey is Crazy" but he sees no point in passive verbs yet.

His attempt at learning colors isn't going so well so far. He knows how to say "color" and when asked he can say "Green" and "Blue" and "Red" but so far hasn't been very successful at matching them correctly. Either he hasn't grasped the color concept yet or he might be partially colorblind, which i understand runs in the men on Jen's side of the family. Much too early to tell however.

He loves his music class, and has started actually singing now along to some songs we play regularly for him. He can now sing the first 4 verses of American Pie, and most of Frank Zappa's Don't Eat the Yellow Snow, and has taken interest in Coldplay recently. Just kidding! he sings along with some folk music from his class and Sesame Street tunes.
Posted by Andy at 11:27 AM No comments:

Here are some new criblets:
Criblet - Meaning
Google Wipe - remembering what is was like getting his face wiped after lunch at Google. Zack said this at a dinner restaurant however, when his mouth was wiped in the same way (wet paper napkin) as he was at lunch.
Rain Duck - referring to a bird flying after a rainstorm we had yesterday.

People's Names! - Zack has shown excitement and satisfaction in learning names of everyone he sees on a regular basis. He can already identify and correctly say the names of his 8 classmates and 2 teachers (including tough ones like "Rhiannon" and "Astrid"). And he has done the same with neighbors on the block Saying Clark, Kevin, Will, Kurt, etc. We have no idea where he gets this because both his parents are horrible at remembering names.

A funny t-shirt story: Zack was shown his mickey mouse t-shirt before we put it on him last week, but then we put on a sweatshirt and zipped it up. When he got to daycare and saw that teacher Anna had the exact same shirt, Zack unzipped his sweatshirt, pulled it open and yelled "Mickey Mouse!" showing Anna his t-shirt! I guess it will be many years before one is actually embarrased at wearing the same clothes....

Zack has also shown an increased interest in books and being read to. He now has more patience to sit through a whole book. However he still doesn't see much point in painting, drawing, and art yet. He is more interested in breaking the chalk and crayons. As for music, he likes to dance and play with drumsticks, but he hasn't tried to sing or imitate songs yet. Currently, he likes to just repeat words he hears in songs.
Posted by Andy at 12:00 PM No comments: 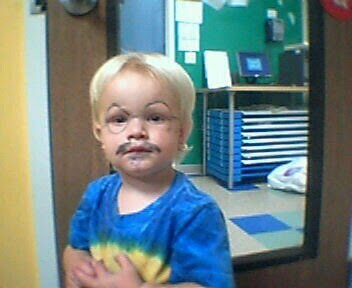 A Picture Share!, originally uploaded by Drumbone.
Posted by Andy at 5:40 PM 3 comments:

Remember "sniglets" from Not Necessarily the News on HBO back in the 80's? They were made-up words that describe things we are all too familiar with. Well, I'm introducing "criblets" which are words or word phrases used by toddlers to describe something in their world. "Criblets" also sounds like a degerative joint disease or a tasty item on a Bennigan's menu, but I digress...
Zack has produced a few two-word phrases recently that consist of real words, but they are paired in an unconventional (and humorous) way in his attempt to describe something new with his existing vocabulary. Sometimes the definition is obvious, sometimes not, but I'll post the definition as best as I can figure it out. Here are the criblets so far:

Criblet - Meaning:
Water Helmet - ???
Butterfly Hockey - A newly-invented sport that involves pushing toy butterflies around with a hockey stick.
Cookie Pocket - ???
Gregory Penis - Apparently it already has a name...
Posted by Andy at 11:45 AM 1 comment:

and "Cookie Pocket" are phrases that Zack is saying that you don't hear too often. Zack picked up a hockey stick this morning and brought it over to two butterfly toys on the floor and tryed to move them with the stick saying "butterfly hockey". Also when he woke up this morning he kept repeatedly saying "cookie pocket" which later changed to "cookie backpack". we couldn't quite figure out what he was referring to or what he wanted, but breakfast seemed to clear it up.

He just demonstrated his first recollection and association with music this morning. We have a small musical keyboard that we were playing with this morning. Zack pressed the Demo button and the keyboard played Yankee Doodle. Zack then yelled "Barney!" It took me a second but then realized that Barney's theme song is to the melody of Yankee Doodle! I was amazed!
Posted by Andy at 8:18 AM No comments:

Ok, everythings better. At 3pm today we got the call we hoped for. So apparently here's what happened: Friday evening Tobey followed a group of teenagers three blocks away from our house, and then continued down the same road 12 blocks to a small shopping center. Another teenage girl found him WITHOUT HIS COLLAR near the Baskin Robbins around 7pm. She picked him up and took him home to Woodside, the next town over. She didn't know how to ID him so finally one of the flyers we put up in the park was noticed by a friend of hers on Sunday, she took a picture of the flyer with her camera phone and sent it to her, and then once the ID was made, she called us. So Tobey spent two nights away in another home with another dog, but all is well.

So the moral of the story: Posting flyers is KEY, and one should expect the ordeal to last a few days. Everyone we talked to at vet clinics and animal shelters said not to worry because in 3-4 days chances are very high it will resolve itself. Sure enough it did.

Here's another tidbit we learned regarding animal shelters. It is typically the FIRST place that someone who lost a pet would check, but is also typically the LAST place someone who has found a pet would contact for fear of euthanasia. The pet finder usually thinks the pet is better off with them (if it is not a nuisance) and may not even call the shelter to let them know.

So my faith in humanity is now restored and we can end the weekend on a happy note. Horray!
Posted by Andy at 9:27 PM 1 comment:

So the last 24 hours have really sucked. Yesterday at around 6pm, we noticed Tobey was gone, and while he was in the front yard hanging out under periodic supervision by Andy who was mowing the lawn, we later heard from a neighbor that she saw a group of teenagers leading Tobey down the street to the park. We haven't seen or heard anything since and are hoping that he is with a family that will very soon return him to us. However, Tobey is very cute and friendly, and we don't want to think that the separation will be a long one. We've done all the necessary steps to help recovery. Fortunately Tobey has a chip in his back that will identify him if scanned at the vet or animal shelter. However, he needs to physically get there first.

We've changed www.gracks.com to be the easy "more information" destination for our ads. Hopefully this will just be a wild weekend for Tobey and he'll be back with us next week. I just worry most about the bond that he and Zack have developed over the last few months. I'm not having a lot of faith in mankind at the moment since anyone responsible seeing his collar would have contacted us by now.
Posted by Andy at 8:04 PM No comments: 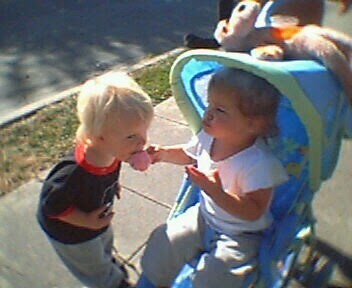 A Picture Share!, originally uploaded by Drumbone.
Posted by Andy at 4:22 PM No comments: