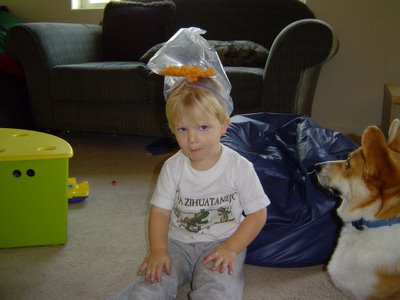 Zack decided to wear a bag of goldfish crackers as a hat. Notice how Tobey is watching him VERY carefully...
Posted by Andy at 9:25 AM No comments:

Well it was bound to happen at sometime. Yesterday Zack discovered mom's lipstick containers under the sink in our bedroom, and I walked in to find him with two different shades of red, one on his cheek and one on his upper lip. (they were very light, so a picture wouldn't have captured it well) Fortunately he didn't know how to twist up the lipstick or else his art creation would have been much more grandiose. I cleaned him up and put away the lipstick, but sure enough, he got into it again this morning. I didn't see anything on his face so i thought nothing of it, but put the makeup out of reach for good. Then after I got to work I noticed my khakis. I've got two nice red streaks on them, so I guess he had put the lipstick on his fingers this morning and grabbed my pantleg as we were getting into the car. Jen is out of town on work, so I'm blogging this as proof that if she finds lipstick on my clothes, she won't get too suspicious. :-)
Posted by Andy at 9:19 AM No comments:

Well he had his 2nd birthday party past weekend, and while it was fun, I think that we underestimated what over a dozen toddlers will do to our house. I think we'll do it smaller next time. Someone jokingly suggested never invite more kids than the age of the birthday boy. Zack had a period of 30 min where he wasn't too happy, because it was the first time that many other kids were playing with his toys, and he was initially trying to protect them.

Zack is running, jumping, and starting to hang on bars for a few seconds. He's shown an early interest in skating, and a strong interest in soccer and kicking balls. His favorite toys are toy cars and trucks. He can spend time doing independent play well. He likes dancing to music, playing drums. Doesn't like art so much, but enjoys reading and being read to. He is very chatty and likes to talk a lot. We've lost track of how many words he knows. His pronunciation is quite good except for not using "L" and "S" at the beginning of words. He can correctly say "Yellow" but not "Little"; he will say "Ittle". He can say "Tobey's Ball" but not "Star"; he will say "Tar". He is getting better with colors, but our doc said that may not fully develop until age 3 or 4. I had thought that since there are toys for infants and toddlers to teach colors, that color recognition and ID was instantly developed in the early months.

His sleeping is still very regular from 8:15pm to 7:00am. with a 12:30-2:30 nap. Although recently, he's been getting sleepy around 11am and will sneak a cap nap if he's not engaged. He still uses a pacifier, which he used to call "Patter" but now says "Pacifier", but only at night. He hasn't shown much interest in using the potty now that we got one, we'll see how that goes. Our doctor said not to force it too early with boys. The bit of mischief he's been doing has been in occasional rough treatment of the dog usually by trying to kick him, which doesn't really bother the dog as much as us. 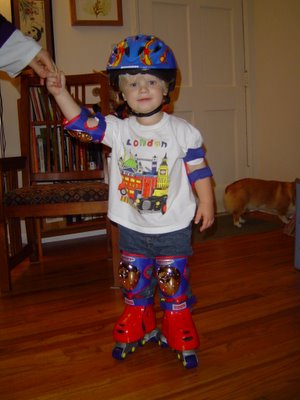 We are back from a week vacation over Christmas in Puerto Vallarta. We went with Jen's parents and we had a great time. More pictures and stories will be forthcoming, but for one of the highlights, check out Jen's amazing gallery of Humpback Whales photos we took on our whale watch!

Some of the highlight of what Zack got for Christmas were a pair of skates and all the safety equipment. These skates are sooo cool. they look line in-line stakes, but they have lateral stability, they fit over any shoe, and one of the wheels on each skate have 3 settings: it can lock in place to help with walking, only roll forward for learning to skate, and free roll for when the skate can go forwads and backwards.

Also, since he had shown some promise and interest on my drumset, we found a deal on a 4 piece starter drumset for him, and he loves it. It comes with stickers of colored shapes on each drum and cymbal, and flash cards you can show the drummer to get him to play the drum that corresponds to the flash card. This works surprisingly well. Today we mixed things up, I would show him a flash card and tell him "soft", and he would play that drum soft. Then I'd show him another card and say "loud", and he would play that drum loud. But, after doing this for a while, Zack wanted to reverse the process and took the cards from me, and said "Daddy's Turn" and showed me some of the shapes and said "loud" and "soft" while I was at the drums. It's funny that he enjoys the role-reversal as a part of learning and playing!
Posted by Andy at 8:23 AM No comments: